How to get from XIY Xi'an Xianyang International Airport 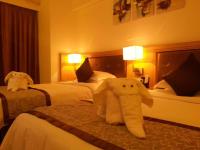 We are sorry but We are not able to recommend any private XIY transfer service right now.