Narita International Airport (成田国際空港, Narita Kokusai Kūkō) (IATA: NRT, ICAO: RJAA), also known as Tokyo-Narita, formerly and originally known as New Tokyo International Airport (新東京国際空港, Shin Tōkyō Kokusai Kūkō), is an international airport serving the Greater Tokyo Area of Japan. It is located approximately 60 kilometers (37 mi) east of central Tokyo in Narita, Chiba.Narita is the busiest airport in Japan by international passenger and international cargo traffic. In 2018, Narita had 33.4 million international passengers and 2.2 million tonnes of international cargo. In 2018, Narita was also the second-busiest airport in Japan in terms of aircraft movements (after Haneda Airport in Tokyo) and the tenth-busiest air freight hub in the world. Its 4,000-meter (13,123 ft) main runway shares the record for longest runway in Japan with the second runway at Kansai International Airport in Osaka.Narita serves as the main international hub of Japan Airlines, All Nippon Airways and Nippon Cargo Airlines, and as a hub for low-cost carriers Jetstar Japan and Peach. At Narita, air traffic movements have been controlled under various noise related operating restrictions. As a result, the airport must be closed from 00:00 (12:00am) to 06:00 (6:00am) the next day to minimize noise pollution impact around the airport.

Public transport to city center of Tokyo from Airport 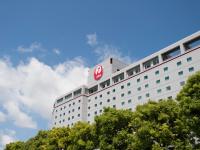 Transfers from Narita International Airport to the city

We are sorry but We are not able to recommend any private NRT transfer service right now.