Manchester Airport (IATA: MAN, ICAO: EGCC) is an international airport at Ringway, Manchester, England, 7.5 nautical miles (13.9 km; 8.6 mi) south-west of Manchester city centre. In 2019, it was the third busiest airport in the United Kingdom in terms of passenger numbers and the busiest of those not serving London. The airport comprises three passenger terminals and a cargo terminal, and is the only airport in the UK other than Heathrow Airport to operate two runways over 3,280 yd (2,999 m) in length. Manchester Airport covers an area of 560 hectares (1,400 acres) and has flights to 199 destinations, placing the airport thirteenth globally for total destinations served.Officially opened on 25 June 1938, it was initially known as Ringway Airport, and is still called this locally. In World War II, as RAF Ringway, it was a base for the Royal Air Force. The airport is owned and managed by the Manchester Airport Holdings (trading as MAG), a holding company owned by the Australian finance house IFM Investors and the ten metropolitan borough councils of Greater Manchester, with Manchester City Council owning the largest stake. Ringway, after which the airport was named, is a village with a few buildings and church at the southern edge of the airport. Future developments include the £800 million Airport City Manchester logistics, manufacturing, office and hotel space next to the airport. Ongoing and future transport improvements include the £290 million Eastern Link relief road, which opened in October 2018. A High Speed 2 station known as Manchester Interchange, will create a regular sub-10-minute shuttle service for connecting rail passengers between central Manchester and the Airport while relieving stress on the Styal Line to the Airport from Manchester which has become one of the most congested routes on the National Rail network.After the airport handled a record 27.8 million passengers in 2017, it is currently undergoing a major expansion programme to double the size of Terminal 2, with the first elements opening in 2019. The £1 billion expansion will be completed and enable the Terminal 2 to handle 35 million passengers. Capacity exists for up to 50 million passengers annually with two runways, however this potential figure is limited by the airport's restriction to 61 aircraft movements per hour as well as existing terminal sizes to effectively process arrivals and departures.

National Express will serve You tran from Manchester Airport to Manchester Coach Station. Price for one way ticket is 4.00 GBP.

Transpennine express will serve You tran from Manchester Airport to Manchester Victoria. Price for one way ticket is 5.00 GBP.

Public transport to city center of Manchester from Airport 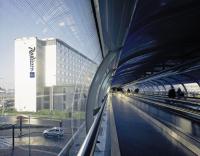 Transfers from Manchester Airport to the city

We are sorry but We are not able to recommend any private MAN transfer service right now.